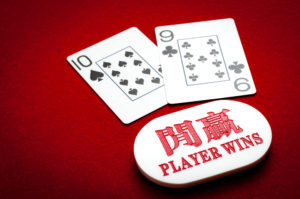 Known to many as either; bac-ca-rat or bah-ca-rah, the pronunciation has little effect on mastering this card game. Developed by French aristocrats in the 1500s, mastering baccarat is no easy feat. This no-strategy, luck-only game is most commonly housed in casino’s “high-limit” areas, due to its minimum betting of usually $20 a hand. To entice more modest wagering clientele, casinos down scaled the baccarat game and created the mini-baccarat. This altered game has a cheaper minimum betting ($5 per hand) and maintains the same game that everyone loves; only cheaper.

The object of the game is simple; choose the “bank” (casino) to win, the “player” to win or a tie hand to take place. The round starts with each person placing their bet. Only two hands are dealt, one to the bank and one the player. The number of people sitting at the table can range from one to fifteen, but that doesn’t change the number of hands being dealt, there are always two.

The winning hand is that which adds up to nine, or closest to nine. All number cards count as their given value, aces count as one, and face cards count at zero. If the sum of the two cards is greater than ten, you drop the tens digit. For example, if dealt a 10 and a 9 equaling 19, your total is 9. When a player is dealt a hand with the sum of 8, it is called le petit natural. When a player is dealt a total of nine, it is referred to as a le grand natural. If both hands total eight or nine, the hand is a tie, if not a third card is dealt.

The game gets a little more complicated once the first four cards are on the table. As previously stated, if the player is dealt an eight or nine, it’s a natural, and they stand and if a player is dealt a six or seven they also stay with their original two cards. There is only an additional card dealt when a zero through five is dealt.

Although knowing the structure and format for dealing baccarat is important, it is also important to realize that all the betting is done before the cards hit the felt, so there is no viable strategy in this game. You either pick the banker, or the player to win. Betting on the player pays one-to-one meaning you win even money on whatever you bet. When you bet on the banker, you get paid one-to-one minus a 5% commission.

The great appeal to this game is its “low house edge” thus giving you, the player, a better chance of making a profit, or at least breaking even. Betting the “Player” carries a 1.36% house edge and betting the “Banker” carries a 1.17% house edge. If a player bets for a tie, they will receive a payout of between 8-1 and 9-1. So the potential for a nice profit is there but the probability is low with a higher house edge making it less attractive to commit to. By paying out eight or nine to one on the tie bet, the casino is banking on the fact that it will not occur with enough frequency to cause them to lose money.

Some players employ a tracking strategy, and place bets based on past hands. If this works for you, by all means keep doing it. But, according to the theory of probability, separate hands are independent events, and thus the chances of the player or the banker winning one hand, given that they won a previous hand, are mutually exclusive. Meaning, just because the player has won five hands in a row, it doesn’t mean he can’t win six, or even ten more. Sometimes people assume that because the dealer has won several hands in a row that a win for the player must come next, so they bet a larger amount. Don’t follow this strategy, it is illogical. This is a bad strategy, and one that can cause you to lose your bankroll much quicker. The best strategy is to listen to the dealer. Ask them what the house would do in the same situation and play by their rules!

The best strategy when playing baccarat is the same as with any casino game, only bet an amount you can afford to lose. So, if you are looking for a new game to test your luck at, try out baccarat, and enjoy the excitement of the game. But, play for fun and maybe you’ll win some.