Craps: Confessions of a Crazy Crapper 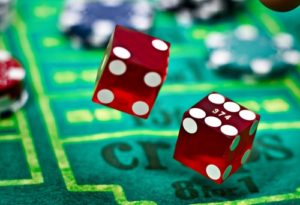 Craps has a cornucopia of bets, ranging from the truly awful to the quite good in terms of the house edges. There are any number of ways you can bet the 11 numbers at the game (those 11 numbers being 2, 3, 4, 5, 6, 7, 8, 9, 10, 11 and 12). Some of these ways have low house edges and some — you guessed it! — have high house edges and some — you probably guessed it — have everything in between.The best bets at the game are Pass and Come or Don’t Pass and Don’t Come. All of these bets come in with a house edge of about 1.4 percent (with the “don’t” bets coming in a fraction of a percentage point less).

But many players, indeed a majority of players, are not satisfied with just betting the best bets because they want “action” and such action players will throw out chips on horrible bets in the 9 percent to 16.67 percent range. These bets tend to have bigger payouts but those payouts cost the player more in overall losses.

David is a long-time craps player (30 years!) and he is what my mentor the late Captain of craps called “a crazy crapper” as he makes all the worst bets at the game. So why does he do such a thing?

“I don’t care if you call me a crazy crapper,” laughs David. “I am a crazy crapper that’s for sure. Just betting the Pass and Come is really boring. You bet those center prop bets [proposition bets] like Any Seven, the Hardways, the Whirl and the rest and you are on the line with the possibility of coming home with some serious bread.”

When I explained that the cost of his Any Seven bet was $16.67 per $100 wagered, it did not deter him. “Oh, I know the house edges, I’ve read the books. But none of the books understand why those bad bets are actually good bets for someone such as me. My aim for playing craps is the thrill of it all and that thrill comes with the idea of hitting it big. You bet the good bets and a shooter has to have a monumental roll to make you a lot of money. There are not too many monumental rolls waiting to happen.”

Lawrence shares David’s philosophy. “I am a true blue craps player in every cell of my body. I love the game and I crave the action and I want to see my money give me a chance for some big hits. There are no really big hits without betting the high house-edge bets. Pass and Come, even with a few times odds, aren’t going to do it. One hit on the 12 will pay 30 to 1. Now that’s a great payout. Put a hundred bucks on that and we’re talking big money.”

I think many craps players tend to share Lawrence’s assessment of craps. Most have no idea of the house edges on the bets they make or what that house edge means in terms of money lost over time. The more the house edge is on a given bet, the more (and quicker) you’ll tend to lose over time. That is an indisputable fact.

The differences in the various house edges are enormous. The high edges are big dangers to players and can cost them dearly and can often nail them far sooner than playing the Pass, Come, Don’t Pass and Don’t Come.

So are David and Lawrence winners? “No,” said David. “You can’t beat craps. I just play to have fun. My fun is the hope that I hit it big on occasion.”

“I have no illusions,” stated Lawrence. “I know I will lose but the journey is fun for me.”

There you have it from two crazy crappers. I don’t recommend their betting styles but it is their money and they can bet it as they wish.
Author Bio: Frank Scoblete’s new books are “I Am a Dice Controller: Inside the World of Advantage-Play Craps”; “Confessions of a Wayward Catholic” and “I Am a Card Counter: Inside the World of Advantage-Play Blackjack.” All available from Amazon.com, Kindle, Barnes and Noble, and at bookstores.