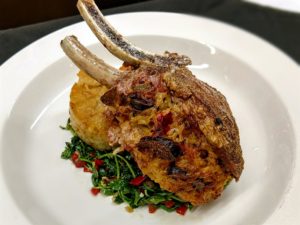 About this dish: This is a favorite recipe of mine that is always a hit whenever I feature it on menus. The Jambalaya keeps the pork succulent, while the spice is a pleasant surprise that adds an extra layer of depth to it. This dish is a great representation of what we do at Fairbanks Steakhouse; it’s a fun, exciting cuisine that looks just as good as it tastes and brings out the adventurous eater in everyone.