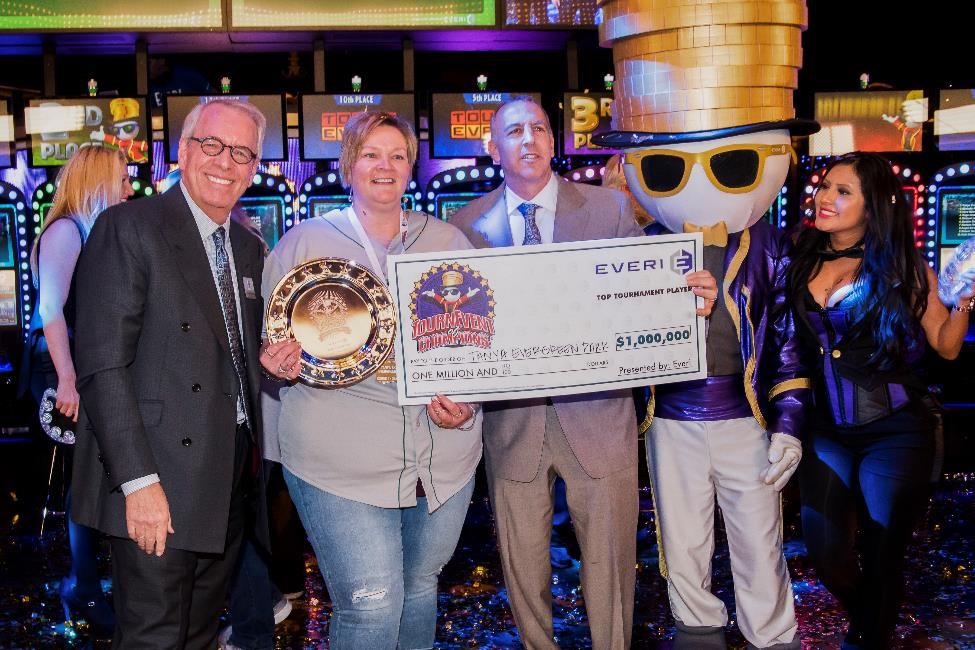 “On behalf of Everi, congratulations to Tanya S. from Pines Restaurant & Casino, Evergreen Park, for beating the top slots players in North America to win the grand prize in the 2018 TournEvent of Champions,” said Ed Peters, Executive Vice President, Sales and Marketing, at Everi. “The continued success of TournEvent of Champions is not made possible without the commitment of our partner casinos as they host TournEvent® qualifying events that create the excitement on which this program thrives. We also want to acknowledge our dedicated promotions team for partnering with the 104 participating casinos over the last five months to create memorable experiences for their TournEvent players.”

The 2018 TournEvent of Champions kicked off in May 2018 and featured three tour buses and The Money Man®, Everi’s iconic brand ambassador, visiting 104 partner casinos traveling nearly 50,000 miles across the United States and Canada. More than 200,000 participants competed in TournEvent qualifiers to identify the top 166 players who competed in last night’s The Million Dollar Event for a share of more than $1.3 million in cash prizes, including the $1 million* top prize. The finale was streamed live on the TournEvent of Champions and Super Jackpot Slots Community Casino Facebook pages.

As a precursor to The Million Dollar Event, Everi held a skill-based slot tournament based on the fiercely popular app Fruit Ninja™ earlier in the day in Everi’s booth at the Global Gaming Expo®. Played on the company’s award-winning and industry leading TournEvent slot tournament solution, nearly all 166 TournEvent of Champion finalists and their guests competed for 14 spots in the Fruit Ninja tournament championship held that evening during The Million Dollar Event, with the winner taking home $5,000.