Benjamin “Bugsy” Siegel- The Gangster Who Had A Dream 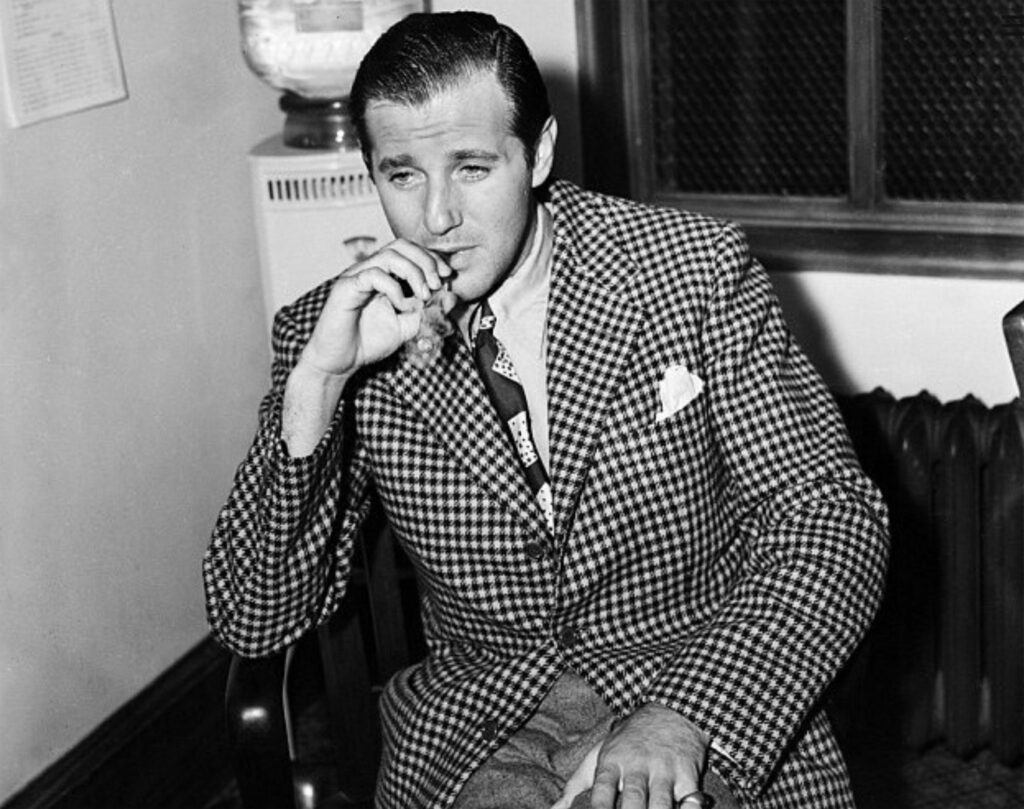 Hollywood has a long history of glamorizing the gangster lifestyle on screen. From Depression-era films like “Public Enemy” and “Little Caesar”, through “The Godfather”, “Goodfellas”, and “The Sopranos”, filmmakers have found that audiences will flock to theaters to watch the exploits of fictionalized mobsters. While the most famous gangster of all, Al Capone, has been portrayed on film more times than any other real-life criminal, one of his contemporaries, Bugsy Siegel, runs a close second.

He has been played by actors ranging from Armand Assante to Richard Grieco to Warren Beatty, and in thinly-veiled aliases such as The Godfather’s Moe Greene (whose name was an amalgam of two Siegel cronies, Moe Sedway and Gus Greenbaum). Siegel’s unique personality, his hobnobbing with movie stars, and of course, his leading role in the development of Las Vegas as it currently exists all makes him an irresistible character for celluloid immortality.

Born Benjamin Siegel in 1906, Ben- he hated the nickname “Bugsy”- began his criminal career at an early age. Dropping out of school to join a local gang, he started by committing small-time thefts with his friend Moe Sedway. By the time Siegel reached his teenage years, he had graduated to extortion, armed robbery, and eventually murder. Along the way, Siegel also befriended Meyer Lansky, who would remain a lifelong compatriot and friend. Lansky realized that it would be safer to operate if he organized his gang in a manner similar to the Italian gangs of the time, and he reached out to Siegel, who happily joined Meyer’s nascent crime organization. The gang expanded into bootlegging, and Siegel began to develop a reputation as a fearless enforcer and hitman for the gang. Their empire flourished as they stole liquor from rival gangs, often killing the heads of other gangs to expand their power. 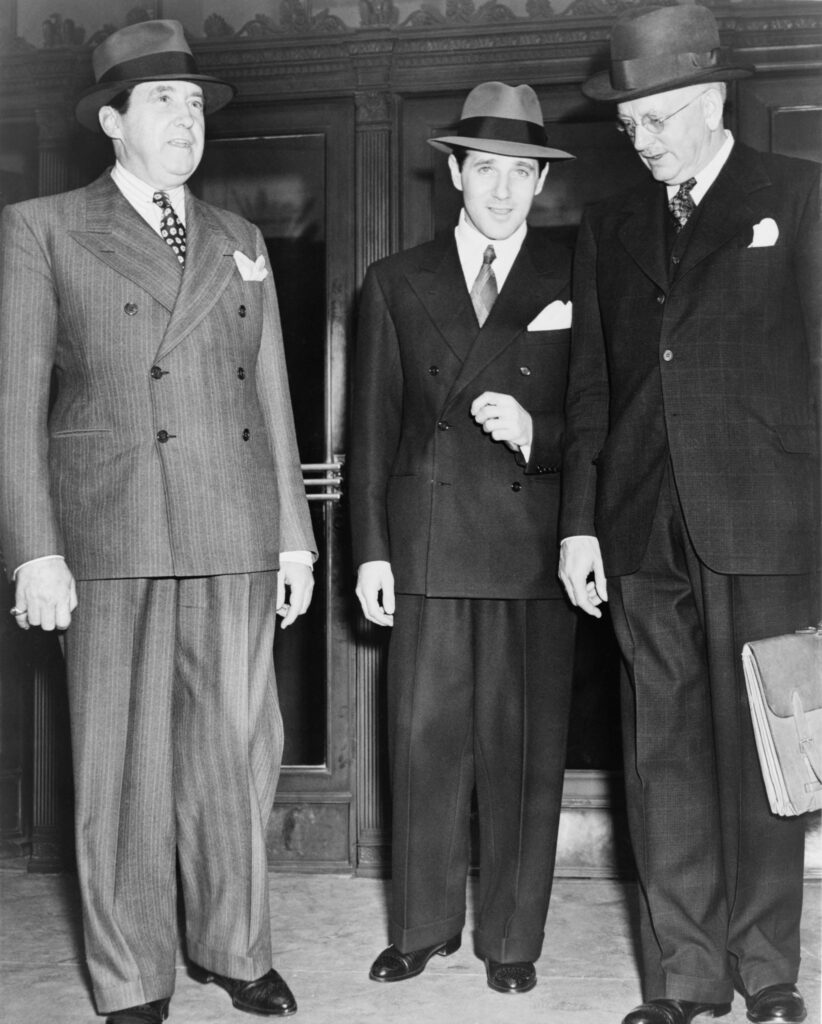 By 1929, Siegel and Lansky had accumulated enough power that they were invited to attend the Atlantic City Conference, an event organized by Chicago gangster Johnny Torrio, as well as Lucky Luciano, and Frank Costello. The purpose of the meeting was to plan for the future of organized crime in America- topics included how to obtain a larger interest in illegal gambling, reducing violence and increasing cooperation between rival gangs, and planning for a post-Prohibition future. As an interesting side-note, the event was held at a hotel provided by Enoch “Nucky” Johnson, who would later become the model for Steve Buscemi’s character on “Boardwalk Empire”. One of the more pivotal decisions made at the event came about because of the refusal of some of the reigning mob bosses to attend the event- two New York bosses, Joe Masseria and Salvatore Maranzano, would not attend because they refused to work with gangs from outside the Italian underworld. This led to the decision by those attending that both Masseria and Maranzano would have to be eliminated to pave the way for future cooperation among gangs of other ethnicities. Siegel was alleged to be one of the four gunmen who pulled the trigger on both Masseria and Maranzano, further cementing his place in the hierarchy of the underworld. Shortly after, Siegel formed Murder Inc, which was the muscle arm of the Italian and Jewish gangs in New York and elsewhere.

Life in the Mob is never a safe one, and by the late 1930s, Siegel had made enough enemies that it was decided that he might be safer on the West Coast. His main job was to develop illegal gambling operations in California, and while doing so, he began to befriend Hollywood celebrities, who found the proximity to danger intoxicating. Siegel entertained lavishly at his Hollywood home, and stars like George Raft, Cary Grant and Jean Harlow frequently attended, as did up-and-coming names such as Tony Curtis and Frank Sinatra. Siegel took advantage of the access his celebrity friendships gave him by extorting studios to pay him to call off strikes called by unions he had infiltrated. He would also borrow money from his celebrity friends, confident that they would be too timid to ask for repayment. Siegel’s public reputation took a turn for the worse in the early 1940s, when he went on trial for the murder of childhood friend and fellow mobster Harry Greenburg. Although Siegel was acquitted, the incident tarnished his cache among the Hollywood crowd, and Siegel took the opportunity to turn his attention elsewhere.

Siegel’s initial interest in Las Vegas was in providing illegal services to the construction workers building the Hoover Dam, but by 1945, he realized that a legitimate business might be good for both his reputation and his well-being. At the time, Hollywood publisher William Wilkerson had built himself a small empire of nightspots on Hollywood’s Sunset Strip, and he sensed an opportunity in Las Vegas as well. Siegel took advantage of a cash flow problem on Wilkerson’s part during the construction of The Flamingo Hotel, and in short order coerced Wilkerson into selling the property to him. When Siegel took over, The Flamingo essentially became a Mob-owned property, and Siegel’s plans began to get more grandiose. Siegel’s vision was that The Flamingo would offer guests the finest in food, liquor, and entertainment, and that by doing so, it would attract not just high rollers, but hordes of lower tier players as well. This vision would eventually transform Las Vegas from a dusty stopover on the way to Los Angeles into a world-class entertainment mecca.

To achieve his goal, Siegel began spending money at an alarming rate- not only his own personal cash, but Mob money as well. While his reputation as a good earner bought him a good deal of patience with his superiors, that patience was not limitless. The situation became worse once The Flamingo actually opened on Dec. 26, 1946, as few of the highly touted celebrities actually turned up; to make matters worse, constant construction noise made the hotel unpleasant to stay in, and the air conditioning system was unreliable at best. Within 2 weeks, the casino had racked up over $250,000 in losses, and the operation was shutdown within a month to determine how to proceed. Siegel realized the precariousness of his situation and redoubled his efforts. Siegel hired a publicist to tout the renovations made and when The Flamingo reopened in March, it paid off. The casino began to turn a profit, and it appeared that Siegel had succeeded. 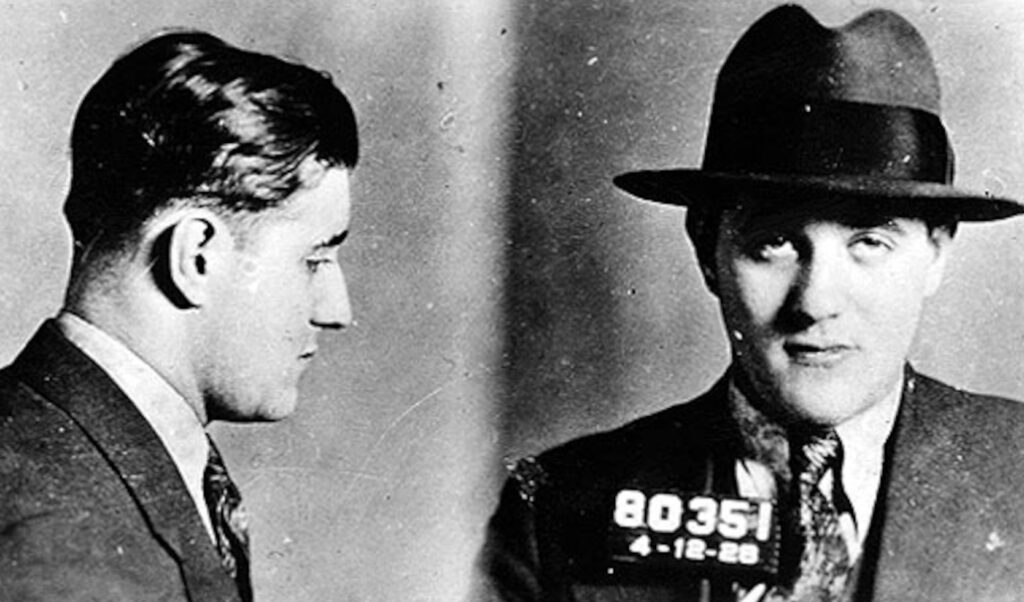 Of course, history tells a different story. On June 20, 1947, Benny Siegel was sitting in his home when someone fired several shots through his window, killing Siegel with two bullets in the head and two in the torso. The crime remains unsolved, although several theories exist as to motive and actors. The most popular theory, as portrayed in Warren Beatty’s film “Bugsy” and other film reenactments, was that Siegel’s profligate spending and suspected embezzling of Mob money during the construction of The Flamingo led to the order being reluctantly given by his childhood friend Meyer Lansky. However, according to “The Mob Museum” in Las Vegas, this scenario is unlikely for several reasons. First, by the time of the murder, Siegel had in fact paid back any investors who wanted out of The Flamingo- by May 1947, after the reopening, the casino had already made $10 million, ruling out the financial reason for the hit. Additionally, the method of Siegel’s execution was outside the standard used in Mob hits; a long-range shooter from outside the home had a high risk of failure. Most mob hits were carried out at close range by pistol. And finally, a close friend of Meyer Lansky’s stated that Lansky would have flatly refused to allow Siegel to be eliminated, regardless of the circumstances. A new theory purports that the killing was actually carried out by one of the brothers of Siegel’s girlfriend, Virginia Hill, and that the motive was personal, not professional.

Regardless of the circumstances of Siegel’s death, his impact on the city of Las Vegas is undeniable. Over 70 years after his death, The Flamingo still stands on the original site, one of the most iconic locations in all of Las Vegas. Bennie Siegel’s vision of a glittering jewel in the desert attracting millions of visitors from around the world to indulge in every pleasure came true, and is his legacy to all who visit Sin City.