Craps: Back to the Basics

Craps is one of the more intense and therefore more fun games in a casino. But it’s also among the more difficult to understand. With this column, I’m beginning a series on the basics of Craps to perhaps help even more people learn how to roll the dice. 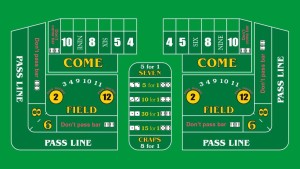 To begin, it helps to understand the roles of the casino personnel attending the game. There are usually three dealers working the game and a box person who supervises. One dealer, called the stickman, stands on the side of the table with the players. He has a long stick that he uses to move the dice. He gives the dice to the shooter, takes the dice to the middle of the table between rolls and announces the payoffs of the winning bets in the middle of the table.

About the Author: Frank Scoblete’s newest book is I Am a Dice Controller: Inside the World of Advantage-Play Craps! He’d love to send you a free copy (while supplies last). Just email your mailing address to him at fscobe@optonline.net and he will get the book out ASAP.