A wise man once told me, “Many a great narrative is camouflaged on that occasion when it first rubs shoulders with the limelight”. Well, believe me when I tell you that this axiom certainly proved true inside the confines of Delaware Park Racetrack on October 4th, 2005. See, because even though the day’s 7th race (a one mile “Maiden Special Weight” turf affair) was captured in dazzling fashion by a 7-1 first time starter, no one in attendance could have possibly realized that the curtain had just gone up on one of thoroughbred horse racing’s most poignant tragedies.

Though he fell from his mother’s womb in West Grove, Pennsylvania at Roy and Gretchen Jackson’s Lael Stables, Barbaro is still considered Kentucky bred since he was conceived (courtesy of a stallion named Dynaformer) at Three Chimneys Farm in Midway, Kentucky. Making his stakes debut on the grass about eighty-eight miles southwest of where he was foaled, Barbaro went on to set a stakes record (1:40.17) in Laural Park Racetrack’s highly regarded 1 1/16 mile Laurel Futurity. Now while he’d been masterfully maneuvered by jockey Jose Caraballo in his first (and only) two starts as a juvenile, Roy and Gretchen Jackson’s upstart was still far removed from that prominent Peruvian horseman who would pilot him into history.

Inducted into Thoroughbred Horse Racing’s Hall of Fame as a jockey in 2008, the sublime Edgar Prado first mounted the equine of his dreams on New Year’s Day in 2006. Pointed towards the turf yet again in his three-year old debut by trainer Michael Matz, (this time in Calder Race Course’s Grade III 1 1/8 mile Tropical Park Derby), Barbaro soon made a believer out of his new rider by virtue of an easy 3 3/4 length score. Subsequently asked by the media if he would risk testing a horse that has “turf champion” written all over him on the dirt along the Triple Crown trail, one Michael Matz paused ahead of circumspectly responding, “I would say you’d have to try the dirt now to see where he fits.” 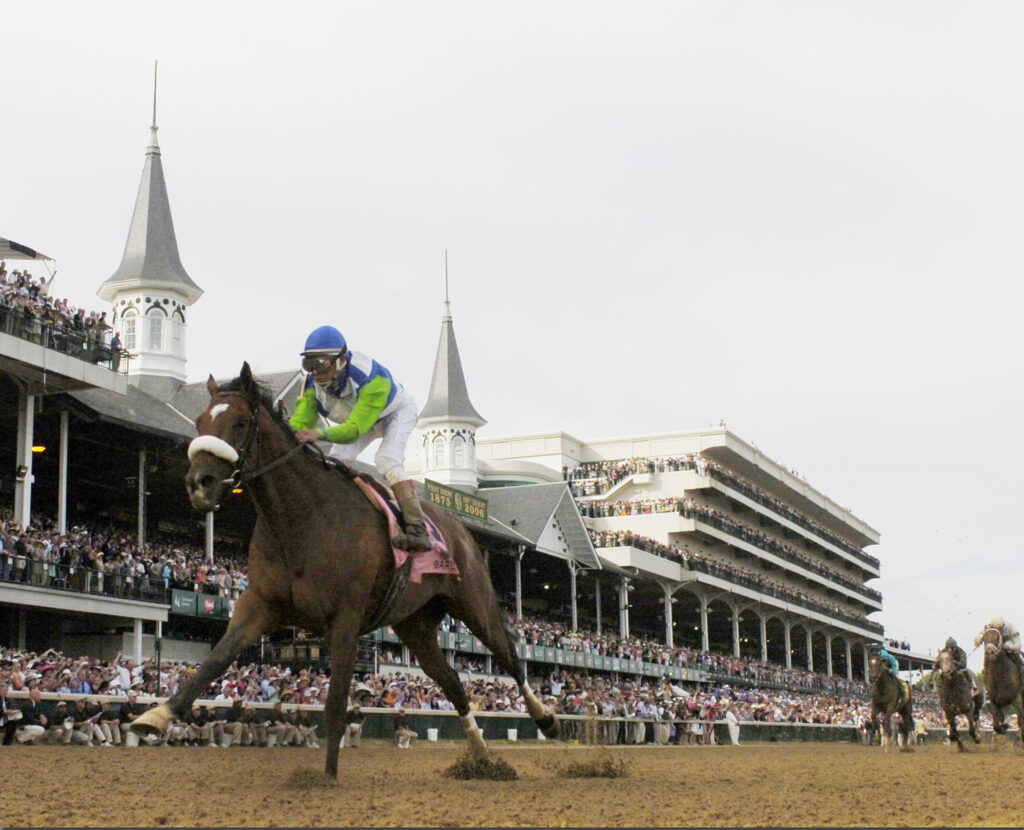 Eventually making his dirt debut thirty-four days later in Gulfstream Park’s much celebrated Grade III 1 1/8 mile Holy Bull Stakes, Barbaro actually wound up squaring off against not one, but two unfamiliar elements, one being the dirt course, but also a sloppy track. Initially tracking in behind a leader named Doctor Decherd for much of the race, the day’s top betting choice then quickly took command as the field neared the top of the stretch. Etching out quick fractions for most of the Holy Bull’s nine furlongs, Barbaro nevertheless gamely held off the hard charging Great Point amid stamping himself as a legitimate Triple Crown Series contender.

Wisely taking a “if it ain’t broke don’t fix it approach”, Michael Matz chose Gulfstream Park as the locale for his heavyweight’s final Kentucky Derby prep. A route that played out eerily similar to the Holy Bull Stakes, the 55th Florida Derby once again saw Barbaro tracking the early pacesetter from second position for a majority of the going (though this time over a lightning “fast” strip). Unlike Doctor Decherd however, Sharp Humor had no intention of surrendering without a fight. Suddenly in the tussle of his young life, Barbaro both gained and relinquished the lead before he scraped together just enough intestinal fortitude to secure the blue ribbon by a neck and pointed towards the Louisville on the first Saturday in May.

The big knock on Barbaro going into the 132nd Kentucky Derby was the fact that he was coming off a five-week layoff. You see at the time, the last horse to come off that long of a layoff and win the “Run for the Roses” was a horse by the name of Needles in 1956. All the same, Mike Battaglia (who was the odds-maker for the Kentucky Derby at the time) felt compelled to make Barbaro a 4-1 co-second choice on the morning-line. Ultimately garnering a decent amount of respect from those who paid a visit to the pari-mutual window, Roy and Gretchen Jackson’s “Goliath” in fact went off as the Derby’s lone second choice at 6-1 behind Brother Derek, the 3-1 favorite who had claimed that year’s Santa Anita Derby.

Due to his natural early speed, Barbaro had always managed to carve out what veteran “race-trackers” call “a good trip”, and the Kentucky Derby was no exception. Conclusively stalking behind and to the outside of Keyed Entry and Sinister Minister for just over a mile, the wearer of the Derby’s pink #8 saddlecloth finally received his cue from Edgar Prado at the head of Churchill Downs’ 1,234 foot straightaway. En route to clobbering the field by 6 ½ lengths, Barbaro likewise became only the 6th (up until that time) undefeated Kentucky Derby Champion.

Two weeks later in the Preakness Stakes, Barbaro tragically suffered a total of twenty fractures along his rear right leg. Though a lengthy and exhaustive life-saving effort was mobilized, Roy and Gretchen Jackson made the difficult decision to euthanize their bay colored Champion on January 29th, 2007. Cremated shortly thereafter, Barbaro’s ashes were eventually interred both at Churchill Downs’ Kentucky Derby Museum and beneath a nearby bronze statue which bears his likeness. 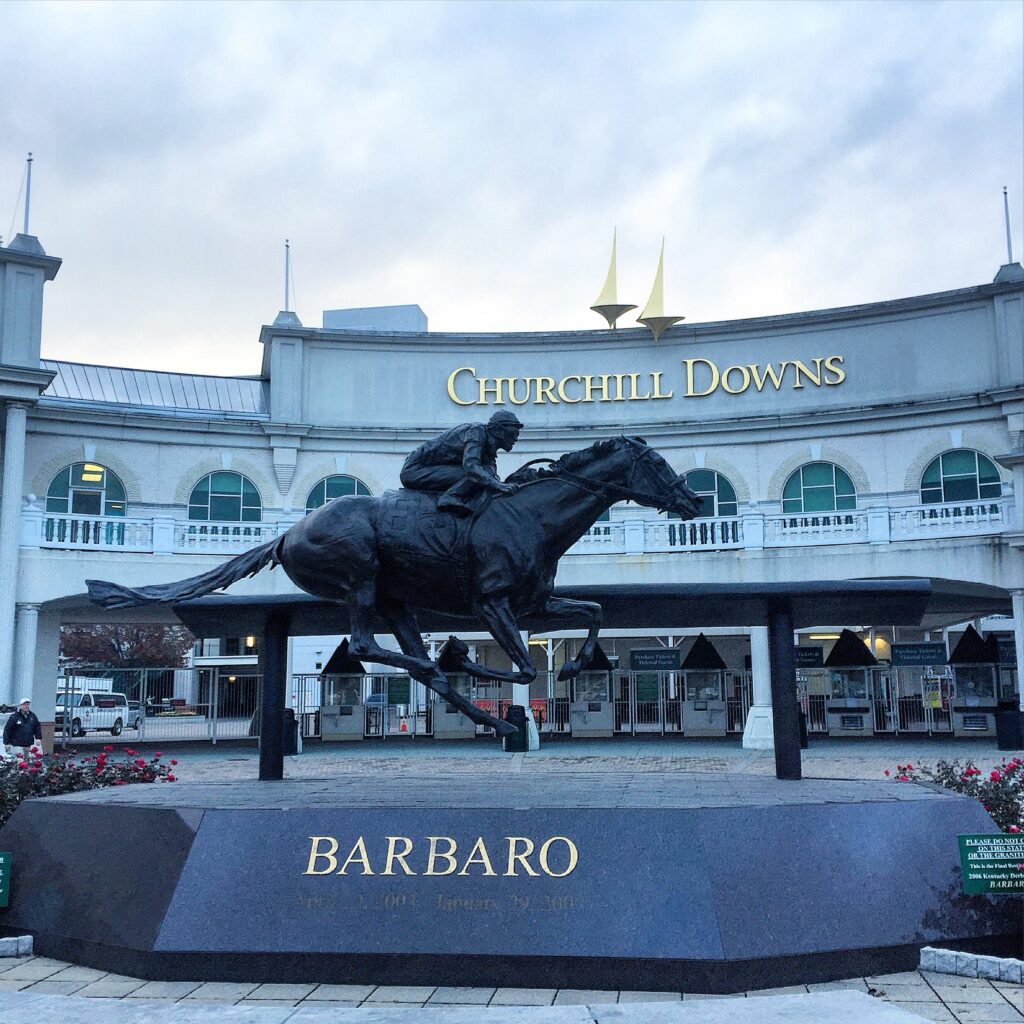 A statue honoring the Kentucky Derby winner stands in front of Churchill Downs in Louisville, Kentucky.

Barbaro was certainly one of a kind and will always live in the lore’s of Churchill Downs and thoroughbred racing history.

By Eric Floyd  – Author of Heaven’s Premier Horse Race, a fictitious horse race pitting the best horses of all time in a single race to determine the champion. Available on Amazon for $14.99. CLICK HERE to purchase a copy today.