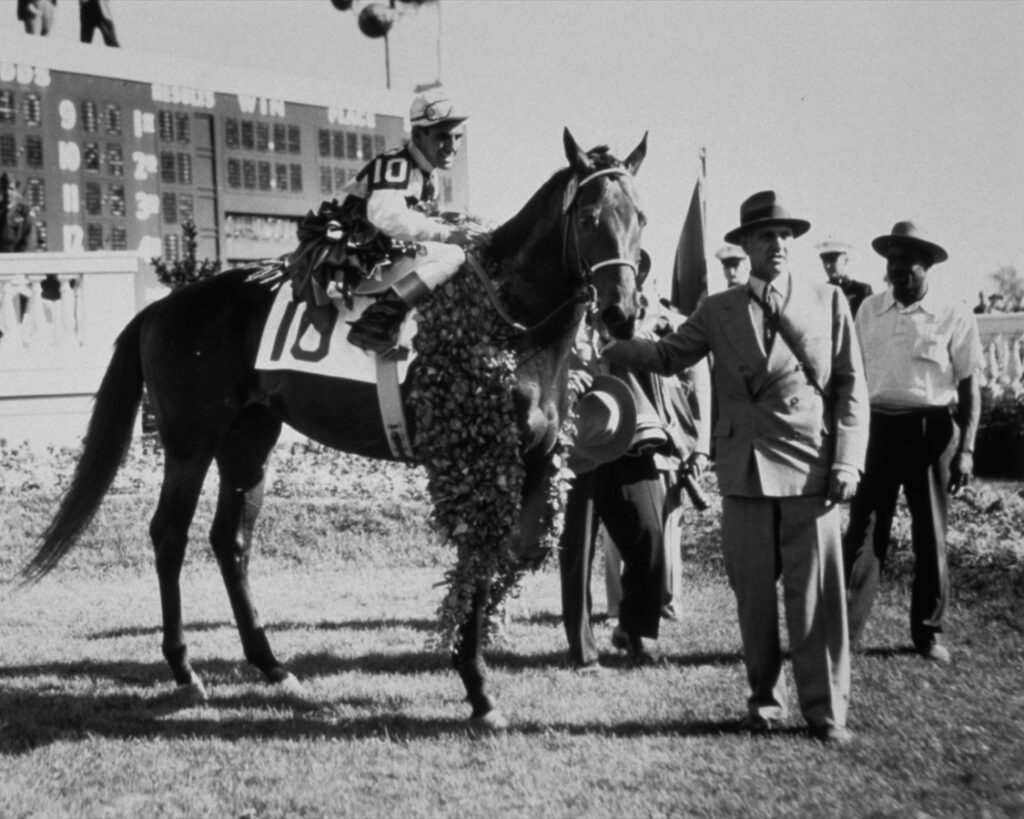 Darkstar handed the Northern Dancer his first and only defeat.

While he is far from the longest priced Kentucky Derby winner, I honestly believe that Dark Star (25-1) pulled off the biggest upset in the entire storied history of the “Run for the Roses”. I say this because at the 79th running of the Kentucky Derby on May 2nd, 1953, Dark Star handed the immortal Native Dancer his first and only defeat.

In order to appreciate the magnitude of Dark Star’s unlikely achievement, one needs to examine just how utterly magnificent Native Dancer truly was. Ranked #7 on Blood-Horse Magazine’s “Top 100 Racehorses of the 20th Century” list, the “Gray Ghost” (this was Native Dancer’s nickname) finished his career with a record of 21 wins from 22 starts and was likewise christened: American Champion Two-Year Old Colt (1952), American Champion Three-Year Old Male Horse (1953) and American Horse of the Year (1954).

Yet when it mattered most, the “Gray Ghost” (who went off in the Kentucky Derby as an “odds on” 3/5 favorite) ran smack dab into a solid wall of ruinous racing luck. Breaking from post #10 in a field of 11 horses, Dark Star initially shot to the front as he simultaneously slanted towards the inner rail in order to save ground. Racing in eighth position early, Native Dancer next got sideswiped by a long shot named Money Maker as he entered the first turn. Edging up into third position as the field pierced the straightaway; the “Gray Ghost” kept cutting into Dark Star’s lead but ultimately fell short by just a head. Blamed excessively for Native Dancer’s loss since he had conferred an “erratic ride”, jockey Eric Guerin woke up to a newspaper story that in part read, “…he (Guerin) took that colt (Native Dancer) everywhere except the ladies’ room.” 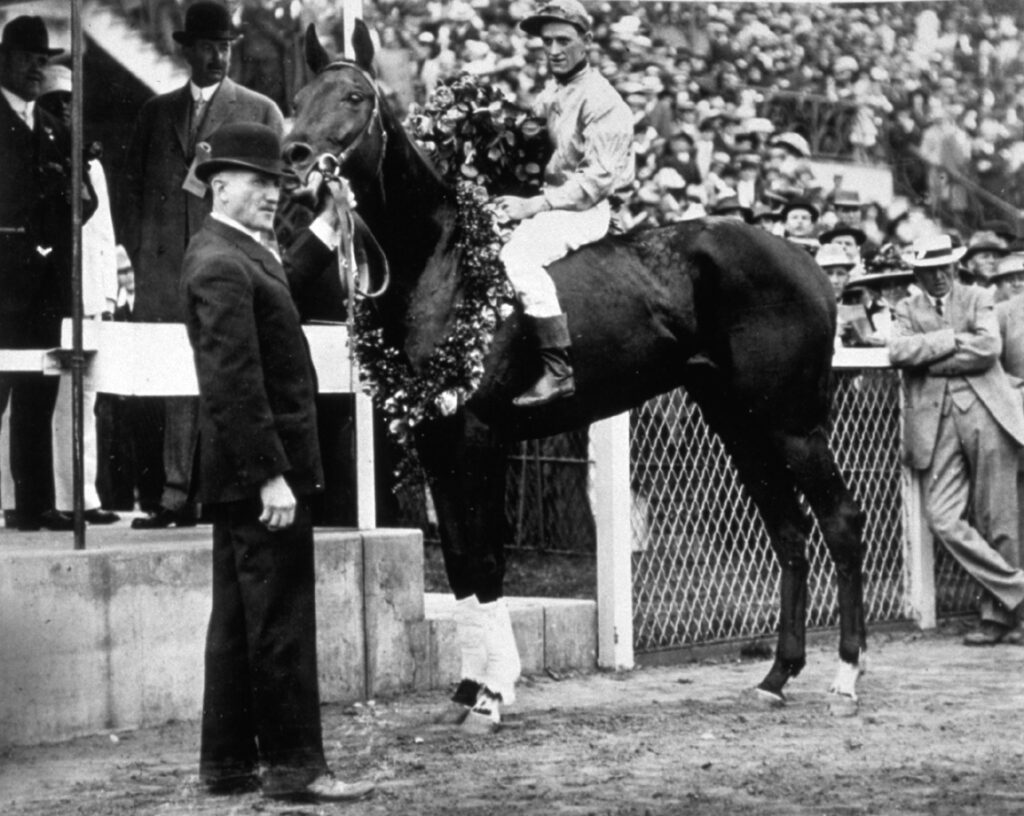 Concerning Derby upsets, this is the “granddaddy of them all” and even though Donerail posted his 91-1 pari-mutual shocker well over a century ago in 1913, the ring of Horse Racing Nation’s collective gasp can still be heard high above Churchill Downs’ famed Twin Spires to this very day. Interestingly enough, breeder/owner/trainer Thomas P. Hayes wasn’t even completely sold on the idea of entering his developing young colt into the Derby since at the time; Churchill Downs didn’t have enough barn space to house all of their on-site horses. This meant that Donerail would have to be stabled at nearby Douglass Park and consequently, would have to make a three mile walk over to Churchill Downs before the Derby even began! In the end however, jockey Roscoe Goose is said to have authored a series of persuasive pitches which eventually influenced Hayes to run his prohibitive outsider. (It probably didn’t hurt either that one of Hayes’ friends, a man named William J. Treacy, agreed to pay Donerail’s entry fee.)

The measure with which bettors dismissed Donerail becomes all the more obvious when one considers that the 1913 Kentucky Derby featured a modest lineup of only eight racers. Nevertheless, Roscoe Goose had his mount right on the heels of a well backed leader named Ten Point as the field turned for home. In addition to scoring by half a length and posting a then record Derby time of 2:04 4/5, Donerail likewise rewarded his faithful followers with a win mutual of $184.90 for a $2 bet! Uh, and to add some perspective, $184.90 in 1913 was worth roughly $5,300 in today’s money! 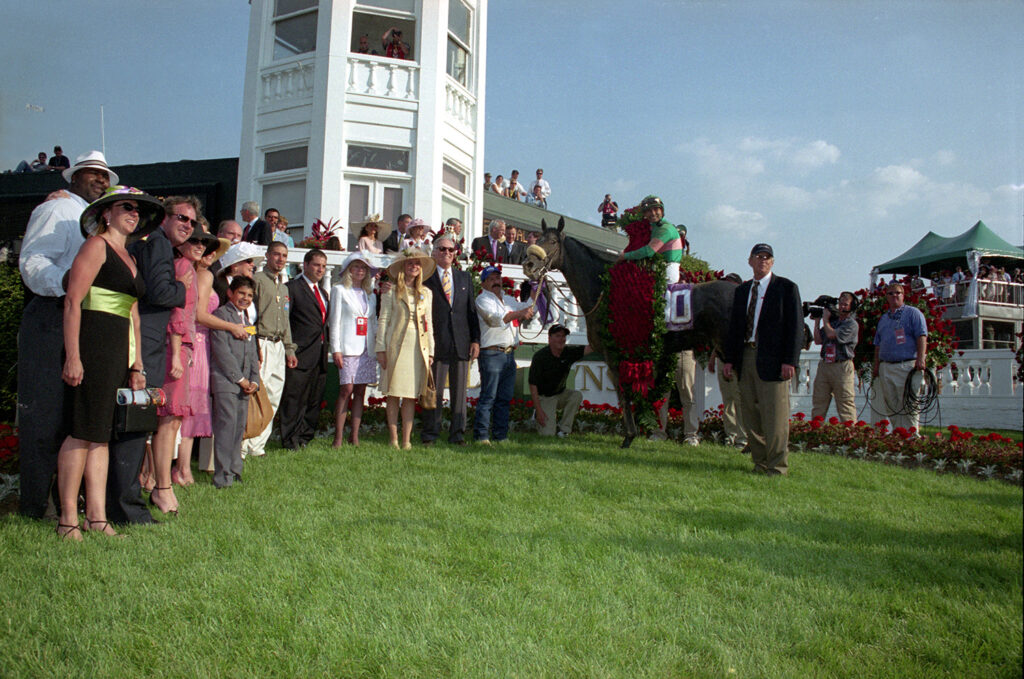 Giacomo rallied from 18th to first in the 2005 Kentucky Derby.

Because the three previous years had proven to be a fiscal disaster, I shouted like canon fire as the 2005 Kentucky Derby field tore through Churchill Downs’ 1,234 foot straightaway. Typically, when it comes to marquee races, I’m that guy who “bets on the nose” however on this occasion, I had conservatively purchased a $200 show ticket on a bay-colored colt named Afleet Alex. (And every time some turf laureate brings up the name Giacomo, I remember that it’s sometimes wise to err on the side of caution.)

2005 was the year that a horse named Bellamy Road won Aqueduct Racetrack’s Wood Memorial by 17 ½ lengths so you really can’t blame anyone who overlooked Giacomo who by the way, entered the “Run for the Roses” off of a pedestrian 4th place performance in the Santa Anita Derby. Yet in front of 156,435 fans who witnessed the “Greatest Two Minutes in Sports” live, Giacomo weaved his way through and around horses (including race favorite Bellamy Road) from 18th position until he determinedly reached the wire just ahead of a 71-1 shot named Closing Argument! As I previously foreshadowed, Afleet Alex rounded out the day’s trifecta however this colt’s $4.60 show mutual paled in comparison to the tote board’s largest “straight wager” payout. The fourth highest priced winner in Kentucky Derby history, Giacomo (50-1) returned $102.60 for every $2 worth of action! 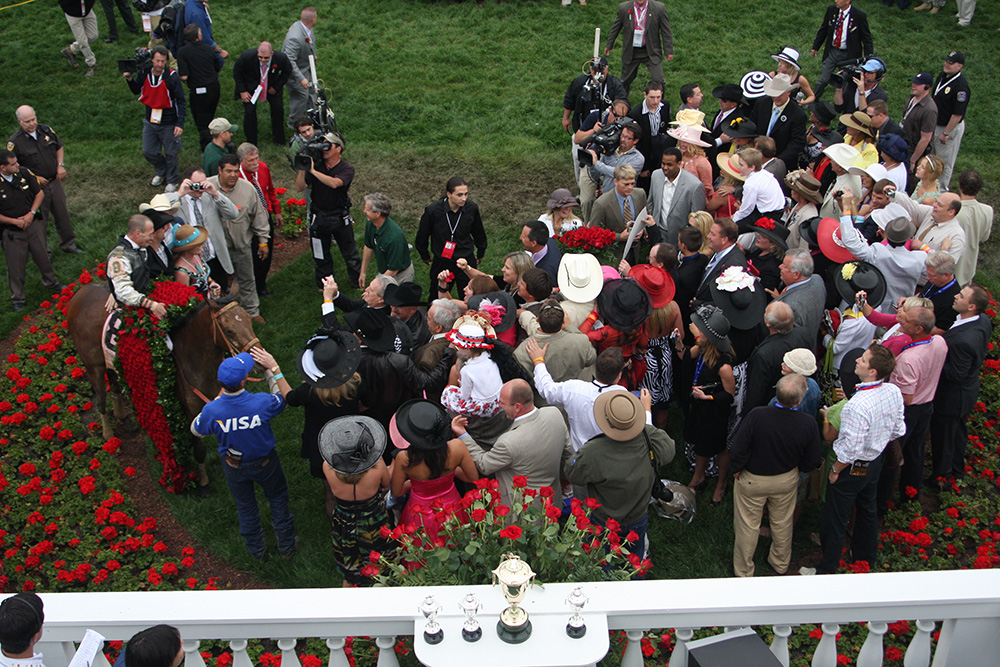 Mine That Bird accomplished an ‘impossible’ feat in 2009.

Sometimes when I lay my head down at night, I can still hear announcer Tom Durkin’s post race call of, “Mine That Bird has won the Kentucky Derby; an impossible result here!!” Of course, at the time, I certainly agreed with Mr. Durkin’s sentiment yet as the years have passed, I have formed an even more radical opinion of the 2009 Kentucky Derby. In short friends, this is far and away the most mythical horse race that I have ever witnessed.

In 2009, “Graded Stakes Earnings” was the criteria for making the Kentucky Derby field so while Mine That Bird was technically eligible to pass the entry box, this one’s recent form resembled that of a horse who belonged somewhere on the undercard. In fact, I will go out on a limb and say that no thoroughbred will ever again win the “Run for the Roses” off of a 4th place finish in the Sunland Derby. All the same, trainer Chip Woolley must have had a glaring premonition because subsequent to loading his “dark horse” into an equine trailer, Woolley drove 21 hours and 1700 miles non-stop from his home base in New Mexico to the backstretch of Churchill Downs!

The 2009 Kentucky Derby remains such a head scratcher for me personally partly because Mine That Bird wasn’t even in the television frame as the field entered the first turn. Upon passing the three-quarters pole still in last place, jockey Calvin Borel must have then muttered, “Abracadabra” for suddenly it seemed as if Mine that Bird was running across a conveyer belt. In back of a courageous rail skimming and rain-soaked ride that secured victory by a whopping 6 ¾ lengths, Borel boisterously paraded his 50-1 shot beneath a blazing infield tote board which read, “$2 WIN #8 – $103.20”.

For a variety of reasons (including smaller field sizes that allow for less congestion and bumping), the Preakness Stakes remains the Triple Crown Series’ most predictable race. Supporting this statement is the truth that only three Preakness winners have come home at odds of 20-1 or higher. Still, I’d be totally remiss to neglect mention of the Preakness’ most notorious edition to date.

The 1975 Preakness also marked the race’s 100th anniversary and Foolish Pleasure, who had captured the Kentucky Derby two weeks prior as the 9/5 favorite, logically procured the majority of the pari-mutual handle. Meanwhile Master Derby, the Kentucky Derby’s fourth place finisher, was widely dismissed at odds of 23-1. Sitting a stalking trip early in the race, Master Derby held a three-length lead in mid-stretch with a hard charging Foolish Pleasure in hot pursuit. Holding sway by a length at the wire despite bearing out, Master Derby ($48.80) thus became the most improbable equine ever to wear the Preakness’ storied blanket of black-eyed Susans.

Known as the “Test of a Champion”, the 1 ½ mile Belmont Stakes remains the final, longest and most arduous leg of the Triple Crown Series. The Belmont’s twelve-furlong makeup calls for immense stamina and consequently, success often depends on an equine’s depth of will rather than their raw physical talent. Correspondingly, Belmont bettors regularly find themselves looking at inflated pari-mutual payouts that could finance a phantom Rolls-Royce.

By the time 2004 rolled around, Horse Racing Nation had been waiting 26 years for their sport’s 12th Triple Crown Champion. Now even well before the “First Saturday in May”, there were rumblings that the Arkansas Derby winner could be the second coming of Seattle Slew and after decisive victories in both the Kentucky Derby and Preakness Stakes; Smarty Jones’ royal coronation at Belmont Park was officially scheduled. Alas, Birdstone didn’t get the memo.

Dismissed at odds of 36-1 due to his eighth-place finish in the Kentucky Derby, Birdstone serenely sauntered along in mid-pack for much of the Belmont. Conversely, a front-running Smarty Jones remained uncomfortably sandwiched between the pressuring duo of Eddington and Rock Hard Ten. Left battered by an aggressive two-pronged attack, Smarty Jones for this reason staggered towards the wire as Birdstone surged. En route to becoming the fourth longest shot ever to win the Belmont, Birdstone ($74.00) likewise blessed those punters who were gracious enough to give him a second chance.

At day’s end, it is my sincere hope that this article inspires you to think outside of the box when it comes to your handicapping. If history has taught us anything, it’s that any horse on any given day can (for whatever reason) outrun their odds. Therefore, be bold and bet a long shot from time to time because while money won is temporal, tales that are attached to extraordinary turf triumphs really do perpetuate throughout eternity!

By Eric Floyd: Eric Floyd is an accomplished turf writer who passionately promotes thoroughbred racehorse aftercare.  An excerpt from his all for charity thoroughbred horse racing novel, “Heaven’s Premier Horse Race” can be viewed at Amazon.com.